The Tunnels by Greg Mitchell is a book about escape tunnels that were built under the Berlin wall during the Cold War.  Though many tunnels and tunnel escapes are looked at, the focus of the book is on one particular tunnel that was funded by NBC in exchange for filming the construction of the tunnel and any escapes that would happen by means of the tunnel.

I picked this book to review simply because I thought that it sounded rather interesting, I didn't realize how absolutely riveting it would be.  I started reading it to myself, got a little way into it and then started reading it out loud to one of my sisters. By, probably the middle of the book, several of my siblings were listening in with fixed attention. 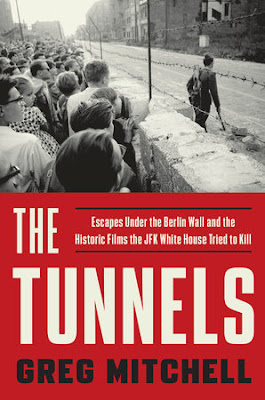 This book is very well written, Mitchell really seems to give one the perspective of the people involved in these escapes so that you feel along with them as they attempt their dangerous work.  We all got pretty tense with every tunnel escape attempt, and also with fears that their work would be discovered by the clever West Berlin spies.  It was very intriguing to find out how they made these tunnels, starting them from West Berlin (the good side) they would pick a building on the other side to aim for (sometimes without those who owned the building being in the 'know') where they would then break through into a cellar or even a living room.  I found it amazing that they were able to aim SO well.  They would work long periods of time, sometimes staying in the same building for a month or more without coming out just to have more secrecy while digging  the tunnel.  Then you have to wait and hope with the tunnelers that there are no Stasi agents waiting for them when they break through, and hope that all of the East Berliners who want to escape make it to the tunnel without being caught.  At times there are Stasi agents waiting and you then hope that no one comes to the tunnel to escape and get caught.

I learned a lot about the Cold war and the Berlin Wall.  I found it fascinating that some of the government officials in the U.S. were (amazingly) actually in favor of the Berlin wall being built(to the East Berlin government's delight), thinking that it would calm things down…which of course it didn't.

The book switches back and forth from different perspective of various characters in this history,  you will meet Harry Seidel, an East Berliner who has already escaped to the West but who wants to get his mother out of the East and therefore works on various tunnels, including the "NBC Tunnel";  Piers Anderton of NBC is another player in this history who really wants this documentary on the "NBC Tunnel" to be a success (and also for it to actually be allowed to be shown on tv);  Siegfried Uhse is an East Berlin informant who is working under cover with some of those who are organizing escapes to West Berlin for desperate East Berliners, he is attempting to get information about various tunnels so that he can pass it on to his superiors and be the means of foiling any escape attempts;  JFK is also a player in these events, he is nervous that any open U.S. support of escape attempts will be the means of provoking an invasion of West Berlin by the Russians, and so he is very wary of any American news documentaries filming and aiding any escapes.
These are only a few of the people involved in this account of this tense time in history.

I just wish that the author would have dealt with Ronald Reagan's part in pressuring Gorbachev to tear down the Berlin wall, I don't remember that being mentioned at all (though I may have just for gotten it).  Also There were some topics that were rather uncomfortable to read, such as the immoral lives of some of the people discussed and some pretty bad language  and expressions that some people used.  I scribbled out a bunch of those things.

But all in all, this was a very interesting historical account. It's amazing to think that these things actually happened,  I thought that Mitchell did a great job of impressing upon the reader the reality of these events and people.

One of the websites where this book may be purchased is at Amazon.com
Posted by Sarah L. at 1:06 PM