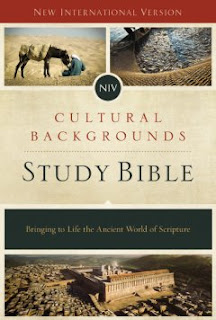 The Cultural Background Study Bible is a Bible that contains a lot of information about the times in which the various sections were  written.  It has many pictures, maps and diagrams, and of course, commentary.  The Bible is pretty large and heavy, but that is to be expected with so much extra content being added to it.

I must say that this Bible, or rather the extra content of this Bible, had a lot of unnecessary things, and even absolutely indecent things.  First, the pictures.  I don't remember if I've ever reviewed a Bible that had so many indecent pictures in it. There's the obligatory Adam and Eve (as usual, depicted before the fall of man with conveniently placed leaves), there are ancient artistic depictions of women exposing various body parts, including the lower half of the body,  there are ancient depictions of men being circumcised…and so on.  And get this, there's even a clay depiction of a woman bathing (not very detailed at all, but still…) from around, and I quote, the "eighth-sixth century  BC, a few centuries after David saw Bathsheba"! I’m sorry people (sarcastically said), but this is absolutely absurd.  Why would Christians think that looking at photographs of naked people are wrong but that it's okay to stare at a painting, statue, or etching of a naked person?????  I don't care how "ancient" the depiction is, or even how undetailed, it's still wrong.  Hasn't any one considered that some of the stuff might even be ancient pornography?  Whatever the case,  It's a denial of the fall of mankind, it's a denial of original sin, it makes it seem as though it is okay to not be ashamed to stare at other people's nakedness/shame, as long as it is ancient or artistic, and it also provides possible "stumbling blocks" to other Christians.  My understanding of the Bible is not enhanced by looking at unclothed people.

Second, some of the commentary actually seems blasphemous. Just look at this commentary on  Isaiah 46:9:  "'I am God, and there is no other. ' The Assyrians saw their god Ashur as being the god from whom all other gods derive…In the Hymn to Aten from New Kingdom Egypt, Aten is hailed as the 'sole God beside whom there is none.'  In an environment where numerous other deities claimed power, Israel's God is not making an absolute statement of uniqueness, though he could, according to Israel's theology, rather, he is saying that the readers know his uniqueness through past experience, and this will be confirmed through future fulfillment of God's plans."  WHAT????????????? God is "not making an absolute statement of uniqueness"?  But what does God say in the VERY NEXT STATEMENT IN THAT VERY SAME VERSE ?  "I AM GOD, AND THERE IS NONE LIKE ME." This is simply shocking.  Let's look at another one:  The commentary on Proverbs 3:19:  "'By wisdom the Lord laid the earth's foundations.'  It is not unprecedented that creation is said to be the product of a deity's wisdom, in the 'Memphite Theology,' the Egyptian god Ptuah is said to produce the world through his heart and tongue, standing for his wisdom and his speech…" Sections in the Bible like this seem to be actually making the case that there WERE/ARE actually other gods like God, without taking into consideration the CONTEXT of the rest of the Bible, and even the evidence of the archeology, that states that other so-called 'gods' are not even gods at all, but rather wood and stone.  Essentially the commentators appear to think it valid to compare God to the attributes that man in his stupidity has ascribed to elaborately carved sticks and stones, and then finding "similar", though imaginary, attributes attributed to those sticks and stones they declare that God is not a unique 'god' and that He is compatible to a rock and a piece of wood.  I hope that they do not mean to do so, but this is STRONGLY implied.

This is very awkward to say, but I don't like this Bible.  Or rather, I don't like some of the commentary and other additions to this Bible.  I don't know if I've ever said this before, but I'm saying it now:  Don't buy this Bible.  The back of this Bible says, in bold letters: "CONTEXT CHANGES EVERYTHING".  It certainly does.

I received a free review copy of this book from The BookLook Bloggers Program (My review did not have to be favorable).
Posted by Sarah L. at 11:53 AM