The Illustrator's Notetaking Bible has a nicely bound bible, with a very handy lay-flat design, making it easy to write or color in it.  On the inside each page has only one column of text with large margins on either side.  Some of the margins have lines for writing in, many of them have pictures that one may color in (the Illustrator part).

I like to doodle sometimes while listening to sermons, sometimes it helps me think and stay focused, so I thought that this was an interesting concept.  But upon examination it was rather disappointing.  In a way, it is reminiscent of the illuminated manuscripts of the past, except that in the illuminated manuscripts I've noticed that the text didn't seem to have as dwarfed by the illustrations as this one appears to me to do on many of the pages (perhaps they did, I just don't remember).  If the text of the Bible itself weren't so small or if it were more…I don't know, 'fancy' I guess, it would seem more fitting and more as if the text and pictures work together rather than compete. 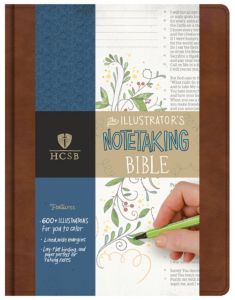 Some of the pictures were too much like graven images (or were exactly so) as there were some pictures supposed to be depicting Christ.  Besides the graven image thing, it just seems disrespectful to have an illustration that one can color in that is depicting the Lord of the Universe!  And then some of the illustrations in the margins seem odd placed next to certain texts.  For instance, coloring in a beautiful illustration running down the margin of a page depicting flowers and ribbons right next to the text where Jeremiah is thrown into a cistern, and where he tells Zedekiah that he will be handed over to the King of Babylon if he does not surrender to that King?  That just seems rather odd and indifferent to what the text is saying.  What illustration should you use for a spot like that? I have no idea…but probably not pretty flowers.

So, I'm not thrilled with this Bible, I wish that they had done a better job at enhancing the text and that they had not added the pictures of depicting Christ.

Many thanks to the folks at B&H/Lifeway Bloggers for the free review copy of this book! (My review did not have to be favorable)