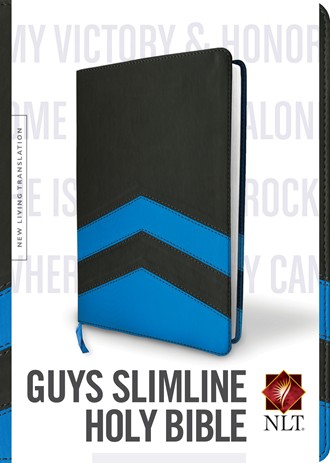 The NLT GuysSlimline Holy Bible is nicely bound, very slim and lightweight. The cover has some of the 'leather-touch' material that feels very nice (not that boys will care that much), and the bright blue lines intermixed with the black should make it very easy to spot if misplaced and also catches the attention which would hopefully be a reminder for young guys to read it each day.   The letter font on the inside is small but not too small, I found it quite easy to read.  At the back of the book, Bible includes a dictionary/concordance, a list of suggested memory verses on various topics, a Bible reading plan and of course the usual maps of the Holy land and Europe.

The translation itself is very readable, the translation notes say that they were trying for a mix of formal equivalence and dynamic, I think this translation leans a bit more to the latter, a 'thought for thought' type of translation which then necessarily has some heavily imposed biased interpretation on certain texts.  I'll give a couple of related texts as an example,   Matthew 19:9: "….whoever divorces his wife and marries someone else commits adultery - unless his wife has been unfaithful"  and 1 Corinthians 7:15, "But if the husband or wife who isn't a believer insists on leaving, let them go.  In such cases the believing husband or wife is no longer bound to the other…"   Both of these verses evince a bias on the part of the translator.  In the Matthew text they make the 'exception clause' permit remarriage rather than just a separation of the couple, and in the Corinthians text they make it sound as though the couple are no longer bound to one another in marriage (in God's eyes) rather than using the simple statement, "no longer bound." Which statement does not give the impression that the marriage is done in God's eyes.  I do not see how people don't see the problem with the 'remarriage allowed' interpretation (which in my view is an eisegetical interpretation not an exegetical one). When you think about it for a moment you realize that: if a marriage is ended in God's eyes by adultery or separation then the couple CANNOT forgive one another and stay married - they MUST legally divorce and separate if the marriage is finished before God, otherwise the couple would be living together out of wedlock (in God's eyes) even if they are not legally divorced.  Legal divorce was permitted by Moses because of the hard hearts of the people, but Christ came to give us NEW hearts.  Remarriage after legal divorce should not be an option in a Christians eyes because they have a new heart, not a hard heart and if they must be separated from their spouse then they should be willing to live a celibate life for the sake of the Kingdom of Heaven (Matt. 19:11-12, 1 Cor. 7:10-11).  I know it's hard to accept but we should not reject or accept what we like in God's Word simply because "it's not fair" or "I don't feel that God would allow that".  Our feelings and our idea of fairness are not the authority, God is, and His Word is our standard, not ourselves. So, as you see, I think this translation is a bit too biased/not literal enough.  *Cough* sorry for rambling on, I just had to get that out and it's been on my mind because we're hitting the topic at my church.

I also didn't understand why some traditional words like, "Justification" were changed to "made right with God" but others, like the word "tongues" in 1 Corinthians 14 were kept instead of changed to "different languages".  It just seemed rather inconsistent.   There were several translations of verses that I liked and thought did a pretty good job of carrying the original idea of the passages over into modern English but overall I think that they could have done a better job, (the ICB seems to be more consistent in that area).

Overall the translation is okay (maybe a little too clear/modern/explicit a translation in some parts- especially for kids) though I strongly prefer the NASB.

Many thanks to the folks at the Tyndale Blog Network for sending me a free review copy of this Bible (My review did not have to be favorable)
Posted by Sarah L. at 4:39 PM