Daily Readings from: The Christian in Complete Armour by William Gurnall 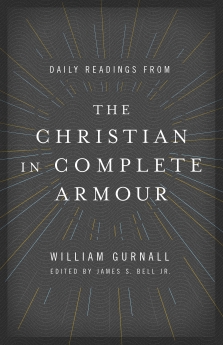 I have read a good chunk of the unabridged Christian in Complete Armour by William Gurnall, it is very good but HUGE, you kind of need to plough through it. This book, Daily Readings from The Christian in Complete Armour, was an excellent idea!  Breaking it up into small chunks for daily reading makes it a much easier read, and gives you a good taste of Gurnall's great skill of teaching and illustrating various spiritual warfare concepts.

The best summary that I can come up with is that this book is like having a spiritual commanding officer giving you a rousing speech each day to be ready to fight the battles to come.  Gurnall talks about the armor our General has provided for us and each individual piece's purpose,  he instructs us to keep in  mind that we should 'wrestle' with the enemy in the way our General has instructed us to do so, not merely in the way that we think we can defeat him,  he also examines the strategy of our spiritual enemy, and gives many warnings about his tactics

Every day Gurnall will warn you about the enemy's deceptive tactics, alerting you with statements like, "When Satan cannot hide the truth, he works to hinder the practical application of it."  and  "If you wish to stand firm in the midst of suffering, forewarn yourself of this fact:  Temptation is never stronger than when relief seems to dress itself in the very sin that Satan is suggesting."  He'll remind you to be ready to follow the Commander's orders at any moment, "Sometimes soldiers do not have as much as an hour's warning before they  must take the field.  And so you, too, might be called out to suffer for God …. Abraham, for example, had very little time to deal with his heart and persuade it to obey God by offering his child.  'Take now thy son, thine only son, Isaac, whom thou lovest' - not in a year, not a month or week, but now (Genesis 22:2).  This command came during the night and 'early in the morning' he was on his way to the mountain (v.3). .....Sometimes God makes very sudden changes in our personal lives."  He will remind you to keep your focus during suffering, "Let those who will, mock and scorn your faith.  What is Heaven worth if you cannot bear a little shame?  If they spit in your face, Christ will wipe it off.  They may laugh at you now, but not later.  The final outcome has already been declared, and you have sided with the victor."  And reminds us that our Commander is invincible, "Let Lucifer choose his way; God is a match for him at every weapon.  If he assaults the saint by persecution, God will oppose him.  If he works by a subtlety, God is ready there also.  The devil and his whole council are mere fools to God.  The more wit and craft in sin, the worse, because it is employed against an all-wise God who cannot be outwitted."

But remember, this book shouldn't be used to replace the Word of God, if you are going to ready any book every day that book should be the Bible.  Like any book, besides the Bible, this book has its flaws, to  name a few, the author may give a bit too much credit to Satan in our spiritual warfare and even in this world in general (he seemed to think that Satan can control the weather), and I don't agree necessarily with all of his advice or application of certain texts, but overall I thought the book was very good, It's now one of my favorite books.  It is VERY motivating and thought-provoking, it is a very good sort of 'push' to have in the mornings to get out and do the work, and fight the battles, that God has ordained for us to face.

I'll end with one of my favorite, motivating, go out and fight the good fight type of quotes from the book:

"You should find great strength and encouragement in the knowledge that your commission is divine.  God Himself underwrites your battle and has appointed His own Son "the captain of [your] salvation" (Hebrews 2:10).  He will lead you on to the field with courage, and bring you off with honor.......For bravery none compares with our Lord.  He never turned  His head from danger, not even when hell's hatred and heaven's justice appeared against Him.  Knowing all that was about to happen, Jesus went forth and said, "Whom seek ye?" (John 18:4).  Satan could not overcome Him - our Savior never lost a battle, not even when he lost His life.  He won the victory, carrying His spoils to heaven in the triumphant chariot of His ascension.  There He makes an open show of them, to the unspeakable joy of saints and angels.    As part of Christ's army, you march in the ranks of gallant spirits.  Every one of your fellow soldiers is a child of a King.  Some, like you, are in the midst of battle, besieged on every side by affliction and temptation.  Others, after many assaults, repulses and rallyings of their faith, are already standing upon the wall as conquerors.  From there they look down and urge you, their comrades on earth, to march up the hill after them.  This is their cry: "Fight to the death , and the City is your own, as now it is ours! For the waging of a few days' conflict, you will be rewarded with Heaven's glory.  One moment of this celestial joy will dry up all your tears, heal all your wounds, and erase the sharpness of the fight with all the joy of your permanent victory"

Many thanks to Moody Publishers for sending me a complimentary copy of this book to review (My review did not have to be favorable).

One of the websites where you may purchase this book is Amazon.com
Posted by Sarah L. at 4:25 PM No comments:

I have seen a couple of timelines before, one showing Jewish history/significant persons and the other world history/significant persons, but I don't recall ever seeing a church history timeline.  This is a basic church history timeline with markers telling of key events, Bible development, key persons and church councils.  Included are some markers of certain heretical groups coming into being (like Catholicism, Jehovah's Witnesses…etc.).

I didn't love the timeline overall, mainly because the arrangement is a bit confusing to me, it is arranged by chunks of centuries (AD 1500, 1600…1900..etc.) and the events are underneath each 'age' but the problem for me is that since the lists of events and people are descending at an angle some of them end up 'in' the section for the next era  when they really aren't' in that era(though they do have a year next to each).  Also, I would have preferred a format like Adam's World history chart one of the features which I really liked about that was that it had colored lines indicating about how long each person lived and showed if their lives overlapped each other (for instance, who of Adam's descendants were probably alive when Adam was still alive), the events of the times were underneath the timeline of the people and it just made it really neat and easier to understand for me.  But I need to keep in mind that this is  just a basic church history timeline, and it probably just isn't my 'style', others would probably have a fine time understanding it.  Oh, and this church history timeline also colors the various markers/symbols to help differentiate between persons, events, councils…etc.  So that's handy.


One of the other things I didn't particularly like about this is that it listed some things that didn't seem relevant to me, especially if one is doing a basic timeline,  for instance in the late 1900s the timeline has a marker for when  Pope John Paul II apologized for the Roman Catholic Church's lack of moral leadership during the Holocaust and there is also  a marker for 'Mother' Teresa's death.   I don't understand how those things are relevant to Church History (unless you think that Roman Catholicism is biblical).


Overall I just thought it could have been better, but some people may really like it.


Thanks you to the folks at Rose Publishing for sending me a free pdf review copy of this timeline to review! (My review did not have to be favorable)
Posted by Sarah L. at 4:00 PM No comments: