Perhaps this is odd, but I find the subject of the Sinking of the Lusitania fascinating.  Perhaps it is because so many people's lives were affected and lost at once, and it was interesting to see  their reactions under pressure and fear of death, some were brave, some were cowardly, some were selfish and some were selfless. 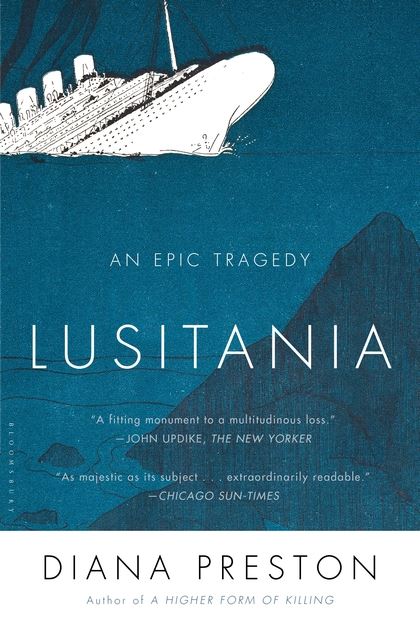 Like the first book I've read on the subject, Dead Wake by Eric Larson,  An Epic Tragedy: Lusitania by Diana Preston looks at many people as they travel on the Lusitania and experience her sinking (The Lusitania was a passenger liner torpedoed by the Germans during WW1 before America entered the war).  Preston seems to repeat the accounts of  more people than Larson did, which I appreciate, even though getting glimpses of so many people does make it a bit 'crowded' at times and hard to remember who's who (that's more realistic right?).  It makes it seem like one is getting a 'bigger picture' of the event.


As I was reading it seemed almost as if I could see the event happening.  It was made more 'real' by Preston's describing the normal life and daily events that were happening just before and when the torpedo hit.  Some people were eating lunch, others were taking walks on the deck, one man was trying to prove to another man how the Lusitania could not be torpedoed when the question was settled by the ship being hit during his explanation!


And then the accounts of thoughts and actions of people as the ship sunk and they entered the water (the huge ship sunk in only 18 minutes!)  made it eerily 'come to life'.  Some were inspirational in their bravery, some were pitiable in their cowardice and the behavior of others was shocking in their desperation to focus on saving their own lives.  One man found two babies left behind on deck, picked them up and jumped into a life boat with one under each arm.  Other men pushed terrified women into lifeboats while other men and women ignored those in need and greedily fought for the means to save themselves.   Some survivors remembered having odd thoughts pass through their minds while in the water.  I was touched and amused by the account of one man, Charles Hill who was "dismayed by the determined selfishness of his fellow passengers….As Hill thrashed in the water and began to go under again, he had the irrelevant thought that 'I hadn't paid the barber for my week's shaves.'  He almost laughed.  But moments later, as he tried to swim to the surface, he felt he was 'dragging something heavy.'" When he came up he found an old man holding one of his ankles while a woman with a child held his other leg, and he didn't kick them off (which one would think would be normal reaction as is proven by the accounts of the unloving actions of others)! He grabbed onto a lifeboat and they were all pulled in.  I found Third Officer Albert Bestic's thought, as he hung on to an upturned collapsible lifeboat, especially striking when he "shuddered" at the sounds around him, "like the despair, anguish and terror of hundreds of souls passing into eternity."


Diana Preston writes well and keeps the interest almost all of the way through.   Towards the end of the book she deals with conspiracy theories, questions, speculations and motives about the sinking of the Lusitania, and I found that a bit boring, though others may not. There were was some bad language used (quotations of various people at the time), and there was at least one detail given about someone's tatoo that I absolutely did not need to know….


It is an interesting account, a sobering look at the actions and thoughts of various people who are close to being summoned to stand before God.

Many thanks to the folks at Bloomsbury Publishing for sending me a review copy of this book! My review did not have to be favorable.
One of the places where this book may be purchased is Amazon.com
Posted by Sarah L. at 1:56 PM