Whirlwind: The American Revolution and the War That Won It - By John Ferling

"From one person God made all nations who live on earth, and he decided when and where every nation would be…" Acts 17:26 (Scripture quoted from the Contemporary English Version © 1991, 1992, 1995 by American Bible Society, Used by Permission.)  It is fascinating to see the events that God had ordained to bring America onto the world scene as an independent nation in 1776. 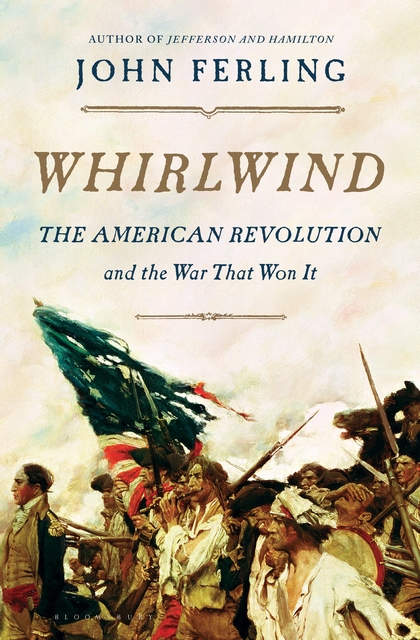 Independence was not on everyone's mind when the American Revolution began.  Many Americans simply wanted to have adequate representation and influence in the British government of their land.  Whirlwind: The American Revolution and the War That Won It - by John Ferling highlights some of the thinking that was going on at the time, and some of the events and writings that sparked a change of thought in many people.  Ferling states in the preface that, "This book argues that the colonists were generally happy with the imperial relationship in the early 1760s, and for a considerable time thereafter.  If Great Britain…had repealed most of its objectionable new colonial policies, as the First Continental Congress demanded in 1774, returning the Anglo-American relationship to where it had stood in 1763, Congress would not have declared independence."


The term, 'Whirlwind', John and Abigail Adam's description of the revolution, is an adequate title for this account of the American arrival at, and fight for, independence.   Events were happening, and thinking was changing, fast.  There were divided views on various things and mistakes along the way.  I was disappointed to realize more fully that before the revolution, as it was building up, some Americans were unnecessarily aggressive towards British leadership and instead of using peaceful means of protest they acted like a spoiled child who doesn't get their way and who puts up a temper tantrum, though they did it in a more adult way: they burned people in effigy, destroyed property…etc.   As if that was a good way to demonstrate the rightness of their cause!  And then there were divisions in congress, some wanted reconciliation with the King, and others began to see that Independence was necessary. Also, many of the American military leaders made mistakes in the fight with Britain, men weren't paid, wrong moves were made, aggressive military action wasn't taken fast enough..etc.  It is amazing that the American military force didn't dissolve altogether, but God had determined that an independent America was to come into being and so it happened.


Ferling shows, throughout the book, the irony that many of the Americans who called for freedom, and demanded it as a right, denied it to other men, and had slaves.  Some began to change their minds of course, and some already were against it and had never been for it, living out their perspective by not owning slaves, and whose American and British ancestors had never owned slaves either.  But as the author points out, "In a revolution supposedly against tyranny and for liberty, natural rights and equality, the surprise was not that some whites were prompted to reconsider slavery, but that more were not moved to do so."  To give an example of how mixed up it was, George Washington owned slaves, Thomas Jefferson was against slavery and yet, ironically, he owned slaves, John Adams was against slavery and he was consistent in his beliefs in that he did not own slaves.


Overall, I found this account very interesting, though not extremely intricate nor does it delve very deeply into this part of history, I thought it was a good overview of the events and perspectives of the time.  I do need to note that, the book does have some bad language as apparently some people back in the 1700s cursed people and things and used other crude terms as well.  I also want to note that I did not agree with all of the perspectives Ferling expressed, but overall, I thought that this was an interesting account of the birth of the U.S.A.


Many thanks to the folks at Bloomsbury Publishing for sending me a free copy of this book to review (My review did not have to be favorable)!
This book may also be purchased at Amazon.com and other bookstores
Posted by Sarah L. at 1:34 PM