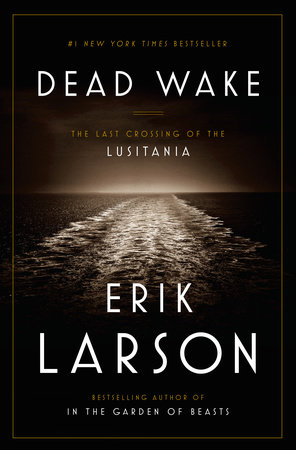 Dead Wake: The Last Crossing of the Lusitania by Erik Larson is one of the most interesting history books I've read in a long while.  Lots of history  books have interesting facts and can keep your interest simply because of the elements of history they present, but this one is among the 'time machine' history books that pull you into the time period and make you seem as if you are a present but invisible observer of the events of the past.


I really didn't know much about the Lusitania before I read this book, I think that I remember hearing it(or reading it) mentioned in connection with World War I but I didn't really have much of a concept of what happened.  The Lusitania was a British passenger ship headed for England, torpedoed by Germany in the "Great War" before America had joined the fight. Larson tells the story from the point of view of many of the passengers, Winston Churchill and the secret "Room 40" in Britain, and also from the German perspective of the German government and the U-boat commander Schwieger and his crew who sank the ship.  President Wilson's thoughts and perspective are also brought into the book, though in his case I didn't quite see the point as it is mainly about his personal struggles over having lost his wife and then his courtship and marriage to his second wife, Edith.


Normally when I've read books, fiction or non-fiction, that switch between various characters there are certain one's I am interested and other one's I'm bored with, wanting to get back to the intriguing characters.  But this book is so well written that all of the characters were interesting, I didn't really mind when the perspective was moved from the war officials and Admiralty in England to the Captain, crew and passengers of the Lusitania, though it did get a bit tense when the torpedoes hit as one wants to keep reading about the passengers and their situation and not about what the war office in England was hearing.


I did think, but this is generally the case with all good books, that it could have been longer.  I wish that Larson had included more of the passengers' perspectives than he did.  I've found, in looking up more on the event, there were a lot more 'stories' he could have included.  And on a more negative note, I wish that he hadn't quoted the swearing, even though it was from actual quotations.  The language is generally more the 'condemning someone' type, and exclamations of where they're condemned to.  Also , some of the accounts of the examinations of the dead were a bit too descriptive. There are some things I don't want, or need to know.


The events of the sinking are fascinating in a unique way, an almost seeming reversal of 'Providence', only it wasn't really a reversal of course, it was just several people's God-ordained time to meet their Maker.  The events of the sinking were set up perfectly: if they had left a little sooner or even if they had been delayed a little longer they may not have met up with the U-20.   If the British Admiralty had sent word to the Lusitania to take a recently opened alternate route, which was definitely safer, then they may never have crossed paths at all.  If the fog hadn't cleared during the time the two marine vehicles were going through the same area then the U2-20 would almost certainly have passed by the ship under water.  And if the Lusitania had not slowed and turned directly towards the U-boat, the Germans may never have had a shot(being slower than the ship), and it is also remarkable that the torpedo caused as much damage as it did.


There were people who lived of course, and their stories are very fascinating.  Some of the ways the various characters survived were amazing, and particularly note-worthy when one realizes that it was not their time to die, and that God was the One ultimately saved them.  One particular account was funny and very moving, in the aftermath of the sinking when two brothers both think the other may have died and are searching for each other, they meet up in a morgue while searching for each other among the dead.


All in all it is a very fascinating account, and very well written.  It makes me want to read more of Larson's books.

Many thanks to the people at Blogging for Books for sending me a review copy of this book!  My review did not have to be favorable)

This book may be purchased at Amazon
Posted by Sarah L. at 12:50 PM No comments:

Ulrich Zwingli, by William Boekestein is, as the series is titled, a "Bitesize Biography" but there is a good amount of content in that 'bite'.  Despite this biography's size, it gives a lot of information to Zwingli. It actually seems to 'introduce' you to him as opposed to making you a mere acquaintance of his life.


The things I most remember about Zwingli, from other books and sources on him, are that he died in a not-so justifiable battle/war and that he debated and opposed Luther on the presence of Christ in the 'Lord's Table'.  I've found out that there were several things I didn't know about his life, these things include sanctifying works of God in and through his life such as his doing away with preaching on Bible texts assigned by the Catholic Church, and opting for a verse by verse, book by book method of preaching instead.


On the negative side, there were the manifestations of the sinful 'remnants' of Zwingli's dead old self that still hadn't conceded that God had won the victory(Rom. 7-8).  Some of these negatives are evidenced in Zwingli's struggle with sexual sin(he solicited prostitutes), even when he had come to an accurate view of salvation.  He technically shouldn't have been a pastor because of that, but he was still a 'Priest' in the Catholic church of that time and they weren't exactly promoting Biblical justification or sanctification.  As the author puts it, "Zwingli's intellectual abilities had greatly outpaced his moral fortitude".  Perhaps the key point in Zwingli's struggle was that it was actually a struggle with this sin, and not a resignation to it.  It does look as though he ultimately did manage to get to get to a point of acting on the Spirit's promptings to habitually 'kill' those sins,  and he married a widow and had several children with her.


Like all Christians, Zwingli had his flaws, and his own battles with his fleshly desires, which makes us admire God's use of the man, realizing even more that any truly godly thing that came out of Zwingli's life was God's work, not his own.  And so it is in all of our lives as Christians, we are dependent upon God for all aspects of salvation, and we take comfort that God's work doesn't just stop at our justification but that it continues with our progressive sanctification and ultimate glorification(Rom. 8:30).


If you want to get a quick view of Zwingli's life and God's use of Him, this biography would do very well.

Many thanks to the people at Cross Focused Reviews for sending me a review copy of this book(My review did not have to be favorable.

This book may be purchased at Amazon
Posted by Sarah L. at 3:07 PM No comments: