God In the Whirlwind - David Wells

"However it happened, the external God has now disappeared and has been replaced by the internal God.  Transcendence has been swallowed up by immanence.  God is to be found only within the self.  And once that happened, the boundary between right and wrong - at least as we had thought about these things - went down like a row of falling skittles.  Evil and redemption came to be seen as the two sides of the same coin, not the two alternatives in life."  Or as he also put it, "We want God's love without his holiness…"   Wells addresses this erroneous viewpoint by explaining who God really is, and what His love is really like.  I really liked his critique of our culture, how it has a 'therapeutic vision'.  As Wells indicates, sadly, the 'church' has been going this way as well, following the spirit of the age they adapt the gospel to be about the fulfillment of our needs, our self-promotion and about our happiness now.  The church needs to actually live like a community of 'aliens' and 'strangers' not assimilating the cultures of this world but living as citizens of Heaven, proclaiming God's Word accurately.  We are to live as sanctified people, not worldly ones, as Wells puts it, we are to "work out what God, in his grace, has worked in" us, living as citizens of Heaven.
God in the Whirlwind by David Wells is an explanation of God's holy love, how God is so different, even opposite, from how our society has imagined Him to be.


I'm sorry to say that there are several things in the books that prevent me from giving this book a higher rating.  First, the author's view of Israel and covenant theology, or reformed theology bothered me too much, .  I have read books before where I have disagreed with the author's 'Reformed' eschatology and yet have still liked the book, but that was not the case with this one.  Here are a couple of instances, first, his statement that"…Paul argued that being a 'Jew' was no longer a matter of ethnicity….'is one inwardly…(Romans 2:29)' The logic here is inescapable.  Those who have been justified on the basis of Christ's work, be they Jew or Gentile, constitute the one 'Israel of God'(Gal. 6:16)"   Yes, being a Jew was not JUST a matter of ethnicity but it includes ethnicity, the true remnant of Israel is the elect descendants of Israel, the Israel of God.  But Israel never becomes Jews and Gentiles.  The Bible does not teach this.  Jews and Gentiles do not cease to become ethnically Jews and Gentiles before God and on this earth just because they are united in salvation.  Just as men and women do not cease to be men and women before God and on this earth because they are united in salvation.  God saves Jews, Gentiles, men and women indiscriminately, He has not chosen to save only one people group, like the Jews, or one sex, or only people who are not slaves, He saves all kinds of people Galatians 3:28.


Another instance is the author's view of types….for example, he thinks that the Exodus of Israel from Egypt is a type of Christ and  his work.  I just don't see that connection made in the Bible, rather if there is any pictorial connection, I see the event mentioned in support of the view that God will one day bring all of the physical descendants of Israel back to their land(Jeremiah 16:14-15) and that they will be able to stay there because, unlike the first exodus of Israel and the Mosaic covenant God made with them, God will make their hearts new, will make the new covenant with them(Jer. 31:31-35,Ezek. 36:22-38).   So when this mass exodus(initiated by God) from the countries where they have been scattered happens, they will return to their land for good(Amos 9: 14-15)because they will then be righteous, which was the requirement for their staying in the land.(Ezek. 36:22-38).


Besides the eschatology/Reformed typological view that kept clouding things, it was also mentioned three times that Abraham stumbled over the promises of God.  This view is blatantly contradicted by Romans 4:20-21, speaking of Abraham, "yet, looking unto the promise of God, he wavered not through unbelief, but waxed strong through faith, giving glory to God, and being fully assured that what he had promised, he was able also to perform." Even in the event with Hagar, God's word does not say that that was a wavering of belief on Abraham's part.  Of course, he was mistaken in how God would give him an heir, but it does not seem as though he struggled with unbelief of the promise.


To sum this up, these things, especially the typological views, just bothered me too much and were too distracting so I can only give this book three stars.


I'll end with one of the quotes/points that I Iiked, here he is critiquing recent and modern society, "When God was displaced from the center of life, revelation was replaced by natural reason, salvation by psychology and eschatology by social progress.  However, even as this worldview was becoming dominant, it also began to disintegrate……What has lingered on is the substitution of psychology for salvation, and therefore the main thread of continuity across these decades, the thread that links the older modernist culture and our current postmodern culture, is the autonomous self.  This is the self, the person in his or her inner being who is unrestrained by the past, by any authority, or social convention, or community, or any truth as something other than his or her own private opinion.  They are not restrained by any God external to themselves.  This is what our culture is validating all the time."


Many thanks to Crossway for sending me a free review ebook(My review did not have to be favorable).
This book may also be purchased at Amazon.com
Posted by Sarah L. at 3:18 PM 1 comment:

Exploring ChristianTheology is  a part of a series of books summarizing the main  theologies of the Christian Church, and summarizing their differences. The general editors of this book are Nathan D. Holsteen and Michael J. Sviegel. The volume gives an overview of the main views of The Church, Spiritual Growth and the end times. 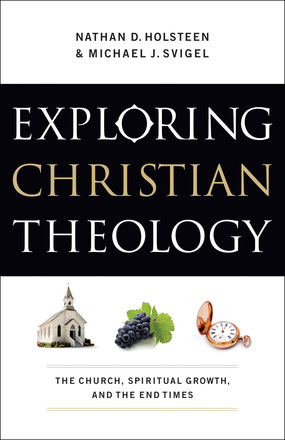 I gave this book three stars because I did not like the first section(By, or edited by Nathan Holsteen) on the Church and spiritual growth.  My dislike began when the beginning of the book, in the short overview chapter entitled, 'The Christian Story in Four Acts', started out with a detailed description of the plot of Star Wars.  I simply did not see that coming.  Yes Star Wars was only used as an example of a so called 'hero cycle' but I don't think the illustration was warranted.  Actually, I found it extremely unfitting for, and distracting from, the subject matter about to be dealt with.  It didn't stop there, other, in my view, inappropriate movie/novel illustrations were used as well.


There were some good things in the first part, for instance I liked the statement, "…often the church has tended to sacrifice holiness for the sake of unity…"  But I just couldn't get past the distracting illustrations.  Also, at the end of the section where quotes by the people of the early church are given, it is mentioned that it is a blessing to be able to consider the 'heroes' of the faith, "...What an honor to be able to read the works of Augustine, to contend with the insights of Martin Luther, to marvel at the brilliance of Anselm.  Taking regular advantage of this privilege can serve in keeping us grounded…'standing on the shoulders of giants…So what have these giants said about ecclesiology and sanctification?..."  They are not giants of the faith, nor would I expect that they would consider themselves as such.  Jesus was the Author and Perfector of their faith, they were not the originators of it.  God was working in them, and we give glory to Him, not to His instruments(who were flawed by the way).  When they stand before God won't they say, "… We are unprofitable servants; we have done that which it was our duty to do."(Luk 17:10 ASV)  And yet we almost make it seem like they went over and above the good works God had ordained for them to do(Eph. 2:10)


I'm sorry, I just had to get that out.  Now, on the other hand, the second part of the book(By or edited by Michael Sviegel) was what I had expected of the whole book.  This section was an overview of Eschatology.  The points of agreement amongst Christians, and the points of disagreement.  I was pleased that the Premillennial view was admitted to have been perhaps the earliest view, and that Amillennialism started 'taking over' later on. I wasn't in complete agreement with the author's critique of those who watch world events for signs of the end, "Some nuanced treatments said things like 'So-and-so could be the Antichrist' or 'This technology may be used in the tribulation as the mark of the beast'…Besides looking foolish, sign-seekers can do damage to people's faith and to the cause of Christ."  I agree that it can be taken too far, if one is dogmatic, but if one is just curious, and simply on the lookout for these events/persons I don't see that it is wrong.


To sum this up, I liked the second part more than the first, it was what I expected of the whole. And here's a quote from the second part to end this review,  "…we should live sober lives as citizens of that coming kingdom rather than allowing the wickedness of this age to intoxicate us with its appealing but destructive power. "

This book may also be purchased at Amazon.com
Posted by Sarah L. at 12:11 PM No comments: