Joseph: And the Gospel of Many Colors by Voddie Baucham Jr. 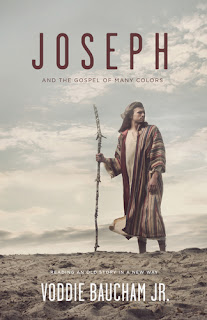 Joseph: And the Gospel of Many Colors is not a full fledged commentary on the account of Joseph, nor was it meant to be.  It is more of an overview of the life of Joseph using a Christo-centric perspective.  I wanted to read this book partly because I thought that perhaps I was misunderstanding what people mean by "Christo-centric" as a hermeneutic.  Some of Baucham's explanations, such as the following, encouraged me in that regard:  "This does not mean that we find Jesus in every verse.  Another objection to the redemptive-historical approach to the Old Testament narrative is that it inevitably leads to allegorizing the text. Suddenly, every part of the story refers to an aspect of Christ.  The pit can't just be a pit; it has to be a type of grave.  The prison can't just be a prison; it has to be a type of hell.  And, of course, coming out of prison and going before Pharaoh must be a type of resurrection.  The possibilities are endless and the dangers, myriad."

But it turns out that I was wrong and hadn't misunderstand what "Christocentric" seemed to be implying. Perhaps I still don't completely understand the argument, but I disagree with the results of the hermeneutic.  Despite what the author says in the above excerpt, he goes on to call Joseph's brother Judah "the forerunner of Christ", not simply genetically, but because of some of his actions:  Judah obeyed his father and offers himself as substitute prisoner of the Egyptian  in the stead of his brother Benjamin, "Once more there are echoes of his greater son, Jesus:  'Greater love has not one than this, that someone lay down his life for his friends'(John 15:13)'…"  Where does God in His word ever make such a connection?  God was certainly gracious to Judah in making him the genetic forefather of the Messiah but I don't see where he was ever said to be the forerunner of Christ by his actions.


My disappointment started at the beginning of the book, this excerpt being a large part of my discouragement:  ".…..Everything we've observed about the Joseph narrative is true.  And anyone teaching the story in a manner commensurate with the brief outline I've just given would be showing faithfulness to the text.  Joseph was faithful.  His brothers were sinful.  He was rewarded with position, power, and prominence.  All true!  However, let me ask you a question.  What separates the telling of the story from any other moral tale?  More importantly, where is the good news? ……Also, do you notice the materialistic bent?  Joseph was faithful to his father and he got sold into slavery.  He was faithful to his master and he got sent to prison.  He was faithful in the prison and he got promoted to second-in-command to Pharaoh, himself.  There you have it:  faithfulness = material wealth, success, notoriety, etc.  How is that different from a Hindu, Muslim, Buddhist, or plain old secular, irreligious tale?  How is it distinct from Aesop's Fables?  Because it mentions God as the source of the success?  IS that all?  There must be something more!"  Why?  Someone can preach the account of Joseph's life without making God's material rewards for him a standard for all Christians. And God certainly is the source of Joseph's success.  What would be wrong with simply preaching the providence of God in Joseph's life in particular and acknowledging that God graciously used him to save the nation of Israel from whence the Messiah would come? Is it no different from a fable if we don't see Judah as a forerunner of Christ by his actions?  If we don't see, or speak of, the tests Joseph made of his brothers as being similar to the 'tests' of 1st John, does this mean that we are misinterpreting the text?  Baucham himself mentions "Of course, the tests in Genesis 42 do not include the person and work of Christ, and right belief therein.  However, the similarities are clear.  The apostle John encourages us throughout his letter to examine ourselves for evidence that our faith in Christ has produced fruit similar to that being tested in Genesis 42."


The author explains that he used to preach verse-by-verse, expository messages, that he was "steeped in an expository tradition that was so concerned with the 'grammatical-historical' exegesis of texts that it became 'atomistic' in its execution….If the text was about practical matters, I did not want to 'spiritualize' it and make it about something else…"  He recounts that his change came when he spoke on an Old Testament passage and a Jewish woman heard it and rather than being offended at the message, complemented him on it.  Baucham was appalled that his message was not a stumbling block to the Jewess(1 Cor. 1:23-24), "was it because she was 'being saved'?  No.  It was because I had not preached Christ!"  I don't see that the passage means that a pastor is not preaching correctly if he is not offensive to unbelievers in every text he preaches upon.  I'm pretty sure that if the Jewess had started attending every service at the  church Baucham is pastor of, she would have been extremely offended sooner or later.


"We were made for eternity.  And unless there's something in the story of Joseph that gets us ready for, closer to, or more informed about that, there's no good news at all."  But isn't God's providential control good news?  Isn't "Every scripture inspired of God is also profitable for teaching, for reproof, for correction, for instruction which is in righteousness. That the man of God may be complete, furnished completely unto every good work."(2Ti 3:16-17 ASV)  Why doesn't Paul say that "every Scripture that is Christocentrically interpreted is profitable…"? I have never understood that when Christ said that 'Moses wrote of me" he meant that everything Moses wrote was about Christ, rather it was that Moses wrote of Him.  When on the Emmaus road Christ "interpreted to them in all the Scriptures the things concerning himself."  I have always taken it to mean that He explained all of the prophetic texts that are found in the Scriptures.


I am very sorry to be so negative.  There were good things in the book, and Baucham didn't find Christ in every text, He did see the providence of God.  But some of his interpretations were odd and his explanation of Christocentric was not Biblically convincing.  I simply don't see that using a literal/grammatical/historical hermeneutic turns historical narratives of the Bible into fables.


I'll end on a positive note with my favorite quote from the book:  "If we refuse to forgive, we have stepped into dangerous waters.  First, refusing to forgive is to put ourselves in the place of God, as though vengeance were our prerogative, not his.  Second, unforgiveness says God's wrath is insufficient.  For the unbeliever, we are saying that an eternity in hell is not enough, they need our slap in the face or cold shoulder to "even the scales" of justice.  For the believer, we are saying that Christ's humiliation and death are not enough.  In other words, we shake our fists at God and say, "Your standards may have been satisfied, but my standard is higher!"  Finally, refusing to forgive is the highest form of arrogance.  Here we stand forgiven.  And as we bask in the forgiveness of a perfectly holy and righteous God, we turn to our brother and say, "My sins are forgivable, but yours are not."  In other words, we act as though the sins of others are too significant to forgive while simultaneously believing that ours are not significant enough to matter."
Many thanks to Good News Publishers / Crossway Books and Bibles for sending me a free review copy of this book(My review did not have to be favorable).
Posted by Sarah L. at 3:00 PM