I keep hearing about, and seeing, books that imply(or directly state) that suffering in the life of a Christian is abnormal.   Actually, suffering is one of the most normal things in the life of a Christian.   That suffering may be physical(persecution, disease, handicap, etc...) or mental(caused by self-denial, struggles to keep focused, slaying of lusts..etc.), but it certainly isn't strange.   Peter writes to the Churches,  "Dear friends, do not be surprised by the fiery ordeal that is taking place among you to test you, as though something strange were happening to you. Instead, because you are participating in the sufferings of Christ, keep on rejoicing, so that you may be glad and shout for joy when his glory is revealed. "(1Pe 4:12-13 ISV)  And thus the title of Sproul's book, 'Surprised by Suffering', in which he strives to take away the element of 'surprise' and points out that we should not be surprised by suffering, but rather, in that suffering, seek to focus ourselves on the God who sends it, see even suffering as a call from God, and to remember that this suffering is only momentary, our home is not in this sin laden world, but in Heaven.

We don't expect to go to Heaven on "flowery beds of ease..", we don't expect, 'health, wealth and prosperity', we expect to submit to whatever the Father sends us, be it 'good' or 'ill'.  Not that it is sin to ask God to take away our suffering, but as Sproul comments, "Jesus qualified His prayer:  'If it is Your will….'  Jesus did not 'name it and claim it.'…...I am astonished that, in light of the clear biblical record, anyone would have the audacity to suggest that it is wrong for the afflicted in body or soul to couch their prayers for deliverance in terms of 'If it be Thy will….'  We are told that when affliction comes, God always wills healing, that He has nothing to do with suffering, and that all that we must do is claim the answer we seek by faith.  We are exhorted to claim God's yes before He speaks it. 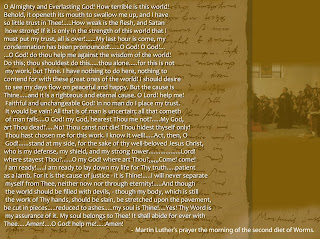 Away with such distortions of biblical faith!  They are conceived in the mind of the Tempter, who would seduce us into exchanging faith for magic.  No amount of pious verbiage can transform such falsehood into sound doctrine.  We must accept the fact that God sometimes says no.  Sometimes He calls us to suffer and die even if we want to claim the contrary…"

I wish that Sproul had focused a bit more on the Sanctification aspect of suffering, but overall, I liked his directing the focus to God, His Word and Will.  Again, I liked that Sproul emphasizes that we ought to look on suffering and dying as being 'vocations' from God.  We want to serve God well in these vocations, just as we want to serve God well in our jobs and relationships.  This is a good book, directing the focus not to this world, but the next, and not on our desires, but on God's Word.   Here is, perhaps my favorite quote from the book:

"We are not doomed to an ultimate conflict with no hope of resolution.  The message of scripture is one of victory- full, final, and ultimate victory.  It is not our doom that is certain, but Satan's.  His head has been crushed by the heel of Christ, who is the Alpha and Omega.
Above all suffering and death stands the crucified and risen Lord.  He has defeated the ultimate enemy of life.  He has vanquished the power of death.  He calls us to die, a call to obedience in the final transition of life.  Because of Christ, death is not final.  It is a passage from one world to the next.
God does not always will healing.  If He did, He would suffer endless frustration, seeing His will being repeatedly thwarted in the deaths of His people.  He did not will the healing of Stephen from the wounds inflicted by the stones that were hurled against him.  He did not will the healing of Moses, of Joseph, of David, of Paul, of Augustine, of Martin Luther, of John Calvin.  These all died in faith.  Ultimate healing comes through death and after death….Certainly God answers prayers and gives healings to our bodies during this life.  But even those healings are temporary.  Jesus raised Lazarus from the dead.  But Lazarus died again.  Jesus gave sight to the blind and hearing to the deaf.  Yet every person Jesus healed eventually died.  They died not because Satan finally won over Jesus, but because Jesus called them to die.
When God issues a call to us, it is always a holy call.  The vocation of dying is a  sacred vocation.  To understand that is one of the most important lessons a Christian can ever learn.  When the summons comes, we can respond in many ways.  We can become angry, bitter or terrified.  But if we see it as a call from God and not a threat from Satan, we are far more prepared to cope with its difficulties."

Thanks to Ligonier Ministries who will be sending me a copy of this book in return for my review of the free pdf copy they sent me(the review does not have to be a favorable one).
Posted by Sarah L. at 1:02 PM