J. H. Merle D'aubigne's 'History of the Reformation in the Sixteenth Century'

Jean Henri Merle D'aubigne's History of the Reformation in the Sixteenth Century is an excellent resource for anyone who wishes to know more about the Reformation.  It is a long read (5 volumes), but worth the effort and time.  In these books D'aubigne takes you on a trip through reformation history, visiting Germany, France, England... etc. He doesn't simply move through one country, finish it and then move on to the next, he visits countries again and again.  First he will take you to Germany, stay there for a little while, and then he'll say something like "let us leave Luther a captive at the Wartburg and go see what is happening in Switzerland".  After dealing with Switzerland he comes back to Germany and catches up on what is happening there, leave again, come back, and so on. And instead of merely recounting events,"this happened and then that happened", he'll often take you into, as it were, the different scenes in  history, bringing 'to life' the different characters.  For instance, when Luther is called to Augsburg to recant, you get to see and hear(or rather imagine while reading) Cardinal Cajetan ranting and yelling at Luther, Luther standing before him, very frustrated, trying to reply, finally getting some words in and trapping Cajetan with his own argument. Furthermore, D'aubigne uses several letters from the reformers, enemies of the reformers and their friends, and quotes historical documents, such as the Papal Bull, the 95 Theses and Tetzel's Theses, to help 'transport' you into history.

Perhaps the thing I like best about this historical work is that D'aubigne aims to show "God in History".  He always acknowledges the sovereignty of God, that the events that he recounts are ordained, decreed, by God.

Here are some excerpts from one of his introductions:  "Had the Reformation been what many Romanists and Protestants of our days imagine it,  had it been that negative system of negative reason which, like a fretful child, rejects whatever is displeasing to it, and disowns the grand truths and leading ideas of universal Christianity, it would never have crossed the threshold of the schools, or been known beyond the narrow limits of the cloister or perhaps of the friar’s cell.  But with Protestantism, as many understand the word, it had no connexion.  Far from being an emaciated, an enervated body, it rose up like a man full of strength and energy.

Two considerations will account for the suddenness and extent of this revolution.  One must be sought in God; the other among men.  The impulse was given by an invisible and mighty hand:  the change accomplished was the work of Omnipotence.  An impartial and attentive observer, who looks beyond the surface, must necessarily be led to this conclusion.  But as God works by second causes, another task remains for the historian.  Many circumstances which have often passed unnoticed, gradually prepared the world for the great transformation of the sixteenth century, so that the human mind was ripe when the hour of its emancipation arrived.

It is the historian’s duty to combine these two great elements in the picture he presents to his readers.  This has been my endeavour in the following pages.  I shall be easily understood so long as I am occupied in investigating the secondary causes that concurred in producing the revolution I have undertaken to describe.  Many perhaps will understand me less clearly, and will even be tempted to charge me with superstition, when I ascribe the completion of the work to God.  It is a conviction, however, that I fondly cherish,  These volumes, as well as the motto I have prefixed to them, lay down in the chief and foremost place this simple and pregnant principle:  GOD IN HISTORY.”

“In history, God should be acknowledged and proclaimed.  The history of the world should be set forth as the annals of the government of the Sovereign King.
I have gone down into the lists wither the recitals of our historians have invited me.  There I have witnessed the actions of men and of nations, developing themselves with energy, and contending in violent collision.  I have heard a strange din of arms, but I have been nowhere shown the majestic countenance of the presiding Judge…
Shall we not recognize the hand of God in those grand manifestations, those great men, those mighty nations, which arise and start as it were from the dust of the earth, and communicate a fresh impulse, a new form and destiny to the human race?  Shall we not acknowledge him in those heroes who spring from society at appointed epochs – who display a strength and activity beyond the ordinary limits of humanity…?”

“The epoch whose history I am desirous of retracing is important for the present generation.  When a man becomes sensible of his own weakness, he is generally inclined to look for support in the institutions he sees flourishing around him, or else in the bold devices of his imagination.  The history of the Reformation shows that nothing new can be made out of things old; and that if, according to our Savior’s expression, we require new bottles for new wine, we must also have new wine for new bottles.  It directs man to God as the universal agent in history, - to that Divine word, ever old by the eternal nature of the truths it contains, ever new by the regenerative influence that it exerts; which purified society three centuries ago, which restored faith in God to souls enfeebled by superstition, and which, at every epoch in the history of man, is the fountain whence floweth salvation.”

“I address this history to those who love to see past events exactly as they occurred, and not by the aid of that magic glass of genius which colors and magnifies, but which sometimes also diminishes and changes them.   Neither the philosophy of the eighteenth nor the romanticism of the nineteenth century will guide my judgments or supply my colors. 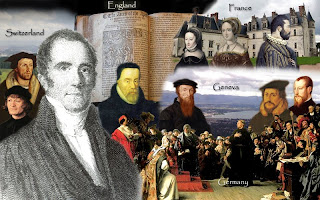 Up to this hour we do not possess, as far as I am aware, any complete history of the memorable epoch that is about to employ my pen.  Nothing indicated that this deficiency would be supplied when I began this work.  This is the only circumstance that could have induced me to undertake it, and I here put it forward as my justification.  This deficiency still exists; and I pray to Him from whom cometh every good and perfect gift, to grant that this humble work may not be profitless to my readers.”
For further incitement to read this work, here is a review of one of D'aubigne's historys by F. Godet:"What difference there is between the perusal of a work of this kind and that of one of the religious novels with which our public is now satiated.  In these latter, notwithstanding all the good-will of the authors, there is always, or nearly always, something unwholesome.  Imagination, that admirable gift of God, is employed to transport us into the chiaro-osouro(?) of fictitious scenes, which communicate a kind of fascination from which it is difficult to emerge, to return to the humdrum of every-day life, and to confine ourselves to the narrow limits of our every-day duties.  Here on the contrary we find the full light of historic truth, imagination restored to its true object - that of giving life to real facts.  The faith of this martyr, it really struggled, really triumphed - this blood, it really flowed - this pile, its flames lighted up the surrounding country, but in so doing they really consumed their victim.  When we read these true histories our hearts do not swell with vain ambition or aspire to an inaccessible ideal.  We do not say: "If I were this one, or that one."  We are obliged to commune with ourselves, to examine our consciences, to humble ourselves with the question: What would become of me if I were called to profess my faith through similar sufferings?  Each on of us is thus called to less self-complacency, to greater humility, but at the same time to greater contentment with his lot, to greater anxiety to serve his God with greater faithfulness and greater activity..."
This historical work is available to download in ebook form for free online:
Volume 1, Volume 2, Volume 3, Volume 4, Volume 5
Also available for download is the one volume version(all five volumes in one).  Note that this version is a different translation from the individual volume versions posted above.
Posted by Sarah L. at 8:41 AM